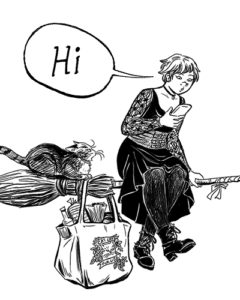 Wendy Xu is a Brooklyn-based illustrator and comics artist, known for her tumblr blog, Angry Girl Comics. Her work has been featured in Shattered: The Asian American Comics Anthology and as part of the New York Historical Society’s Chinese in America exhibit. She is co-creator of and currently draws the webcomic “Mooncakes” and “Terry Shin, Pigeon Boyfriend”.